Voluntary Architects’ Network and Shigeru Ban Architects find the solution of living after the earthquake in Nepal in 2015. 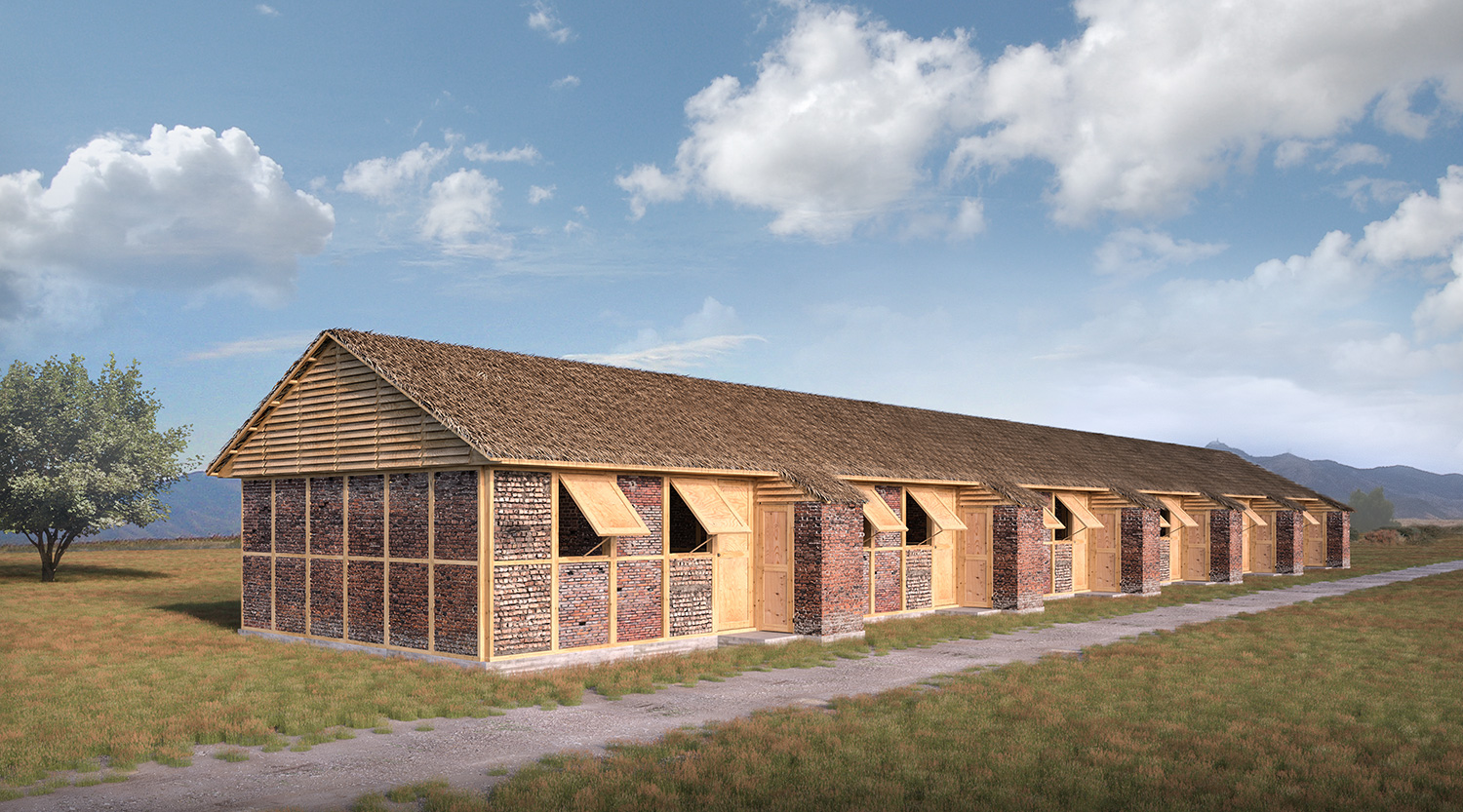 In response to the earthquake in Nepal which struck on 25th April 2015, Voluntary Architects’ Network (VAN) and Shigeru Ban Architects (www.shigerubanarchitects.com) supported the victims by providing shelter, housing and other community facilities. As an emergency response, the team delivered tents that had been collected through donation and were assembled at disaster-affected area as a shelter and medical station.

During their visit to Nepal, the team made preparations to assemble paper tube shelters as a short-term project with student volunteers. They had meetings with local architects and companies who could coordinate the construction of temporary houses, and held discussions with the Japanese embassy. They visited the outskirts of Kathmandu to see the disaster-affected villages and in the process, they researched local materials, markets and traditional building techniques. At the same time, the team was also able to find out the problems unique to the local sites.

Most of the collapsed buildings had a wall thickness of approximately 50cm that were made of simple structure by making layers of sundried and baked bricks. Even the people whose houses were not totally collapsed feared to live in brick-made houses after the traumatic earthquake experience and preferred to live in tents. 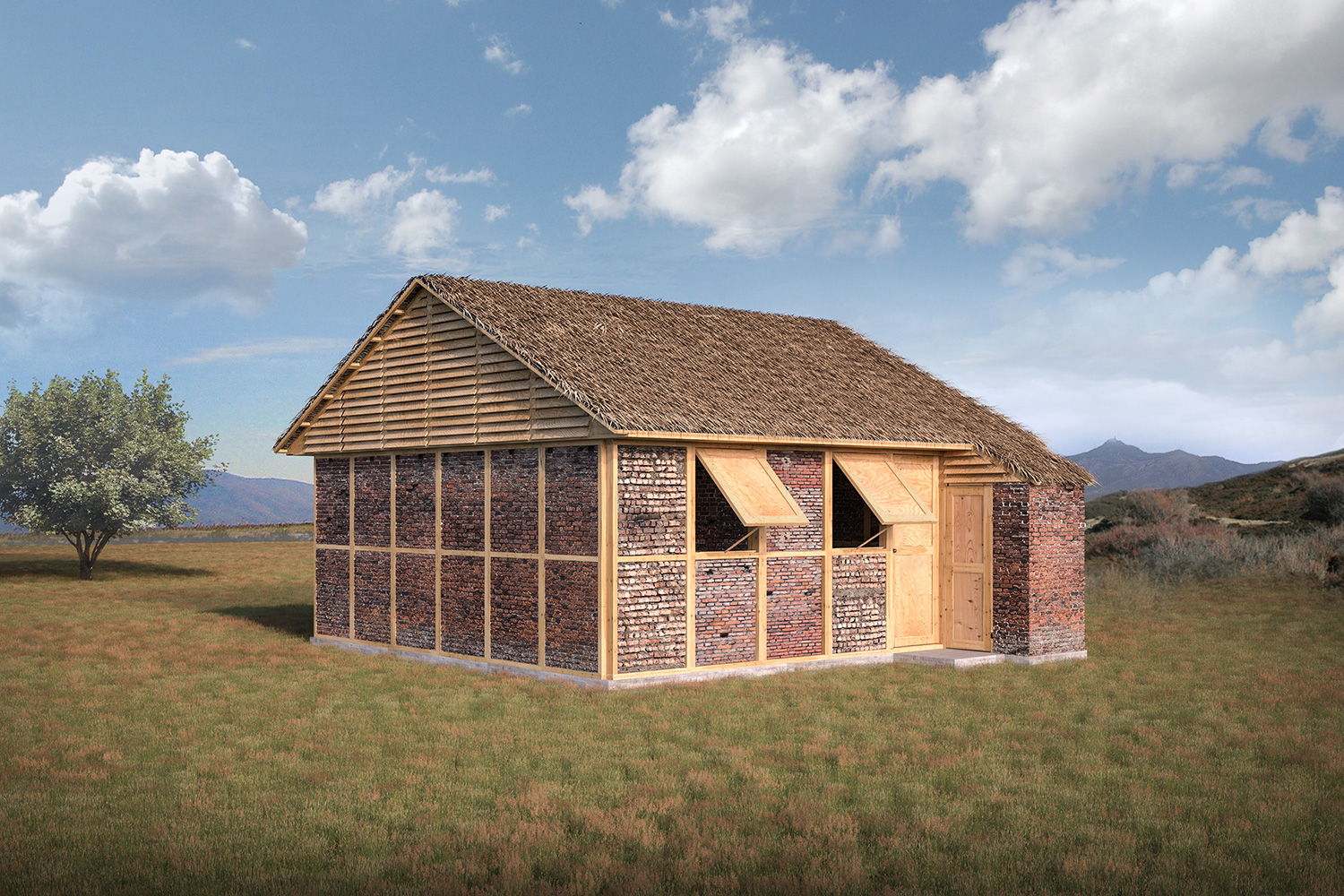 “The community appealed to me, expressing that they never want to live in a masonry house. One of the biggest problems at the disaster site, however, is how to dispose of the rubbled bricks accumulated in the wreckage,” recalls Shigeru Ban.

While looking at the traditional Nepalese houses that had not collapsed, he noticed the presence of carved wooden frames embedded within the brick walls. After studying traditional Nepalese architecture, the prominent architect went to a timber market in the suburbs. Besides milling lumber, market workers were constructing window and doorframes using simple tools. Drawing inspiration from the traditional window frames and the abandoned piles of rubbled bricks, a construction method formed in the architect’s mind: a wall system that could be assembled by connecting modular wooden frames (3ft x 7ft or 90cm x 210cm) and infilling with rubbled bricks (Fig.13). 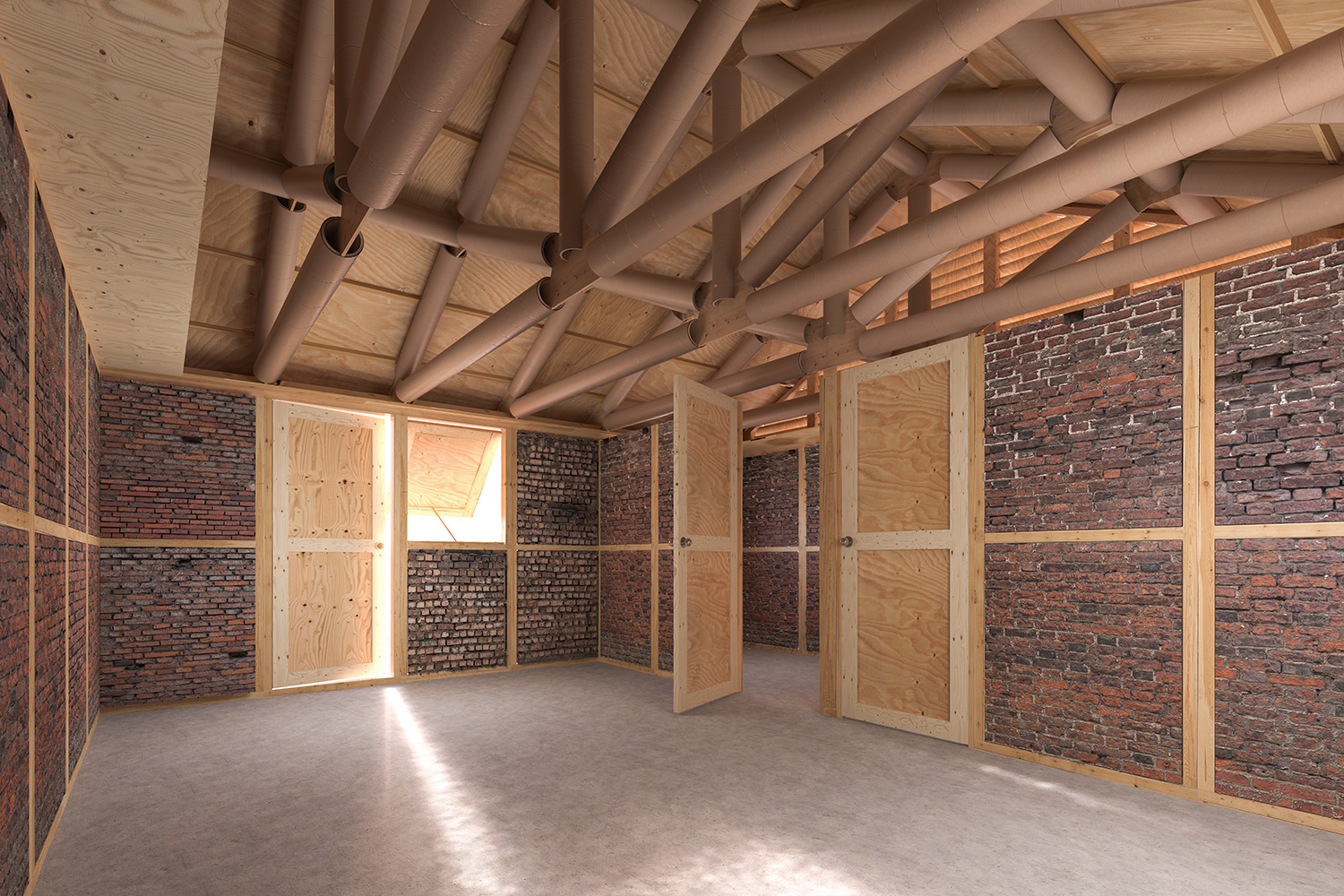 “I plan to build an experimental structure and test how much force the wooden frames can bear. The structural integrity of this temporary house lies primarily in the wooden framing, and although the walls are to be infilled with rubbled bricks, the masonry itself functions as a secondary structural system. In the case of a two-story building, one can add a plywood panel inside the wooden frame for structural strength,” shares Shigeru Ban.

In the permanent housing phase, the architecture maven had begun talking to both Japanese and overseas investsors to develop low-cost prefabricated housing, which had already started in the Philippines. He expresses, “This project commenced after the 2011 earthquake in Japan when the lack of supply in temporary housing became apparent. I designed a low-cost prefabricated house that can be manufactured in developing countries such as the Philippines and India, and assembled in disaster struck zones, if the need arises. The structure of these prefabricated homes consists of wall assemblies using fiber reinforced plastic and foam board sandwich panels.”

This project not only creates better quality temporary housing rapidly, but also creates local employment through factories for these houses in developing countries. This system serves to improve the housing conditions of low-income groups in developing nations. A prototype house has already been made and assembled at the factory in the Philippines.